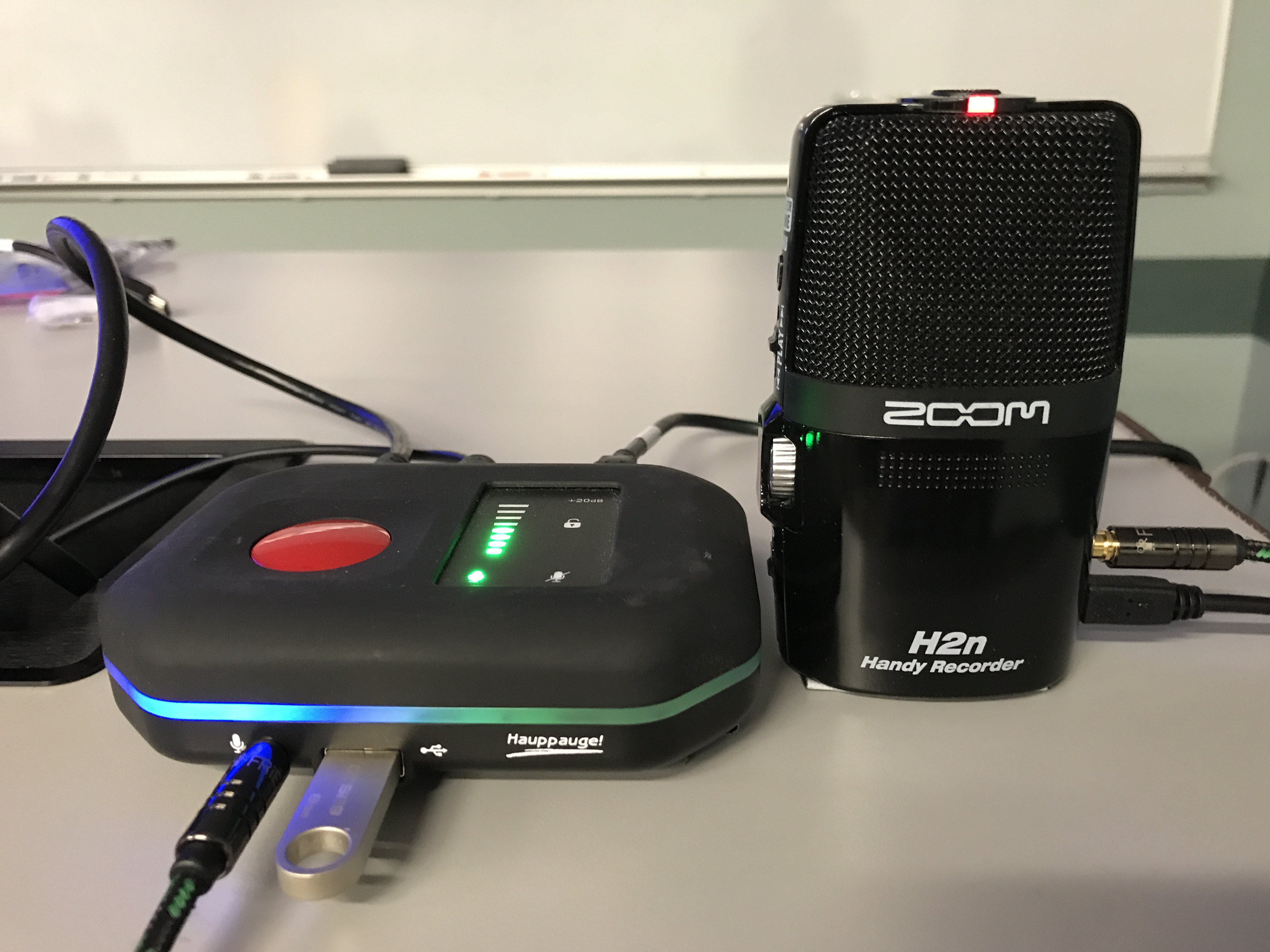 It has been nearly a year since I’ve updated the status of my camp recording kits. Since DCSTL15, two other camps took me up on my proposal to sponsor my travel and hotel in exchange for me recording and posting their sessions: TCDrupal and BADCamp. And, of course, as a MidCamp organizer, that counts too. And with each of those camps, I’ve iterated and learned from invaluable successes and failures.

First off, here is a link to the current kit.

With everything, each kit is still under $450. In addition, zip ties to hold the VGA to HDMI dongle tight and some gaffers tape to secure everything to the podium are needed.

At Twin Cities, I learned that, while I try, I cannot reasonably start and stop every recording in every room, especially at camps with five concurrent sessions spread over multiple floors and buildings. The amount of volunteer participation at TCDrupal is incredibly impressive. I had loads of help at my disposal, but only a few moments to outline how the kits work, so I spent a lot of time troubleshooting from room to room.

BADCamp is another camp that sprawls over a campus and is a bit looser on the room monitor support. So this time, I came armed with printed instructions at each podium for hooking up to the kit. I added some basic troubleshooting and my phone number. I missed about half the session starts, but speakers were mostly able to follow the instructions and run things without me. That was a huge win. Unfortunately, remembering to also start/stop the audio record was hit or miss.

By the time MidCamp rolled around, I simplified the instructions further and also set the backup audio record to just run all day, removing the failure point of missed audio. The big red button is easy and enticing. The little button on the audio recorder remote...not so much. MidCamp, with two days of four concurrent sessions was my first 100% captured camp since St. Louis.

There are four recurring issues with this setup:

Hopefully, the time of laptops that only have VGA out is coming to an end. I've tried several different VGA-to-HDMI converters with basically no luck. And to spend hundreds of dollars or more for a fool-proof converter when modern laptops have better video output is a hard pill to swallow. I don't foresee this being a long-term problem.

The audio issues are baffling. In some cases, no audio at all is recorded with the screen capture, while other times it is sped up and choppy, hence the importance of the backup audio files from the voice recorder. But this means post-processing time which delays uploads. I intend to contact Hauppauge support, but honestly don't expect to get very far as I am using their device as it was not intended. Lastly, the capture device has a touch panel for adjusting gain and muting the audio. It is a little too easy to accidentally mute the audio.

Minor annoyance: occasionally, the recordings will split into two or more files, meaning I have to stitch them together in post.

At MidCamp for the past two years (both held at different locations on UIC campus), some of the projectors would intermittently go dark during presentations. While this has no impact on the recording, it is extremely unsettling for the presenter and annoying for the attendees. I recall this happening in some cases at Twin Cities, but not at BADCamp. So this one currently has me stumped with no good plan of resolution at this time.

For obvious reasons, I can't record all the sessions at all the camps. And already I have firm plans to record Twin Cities in June, St. Louis in September, and BADCamp in October. Talking to folks at Drupalcon, I also now have soft commitments with Drupal GovCon in July and Drupal Camp New Jersey in January. And other camps have reached out, but I have conflicts.

I managed to pack up a complete kit into a 10" Pelican case. This means that if I can start training some proxies and write up some detailed instructions and troubleshooting, then this solution can scale. Maybe folks won’t have experience with the post-production, but I can help with that remotely, if needed. The beauty of these kits is that with timely starts and stops and good audio, the MP4 file on the thumb drive can be uploaded as soon as it is collected.

The good news is that the more camps I can record, the more data I can collect and the more I can refine the process to make it scalable.